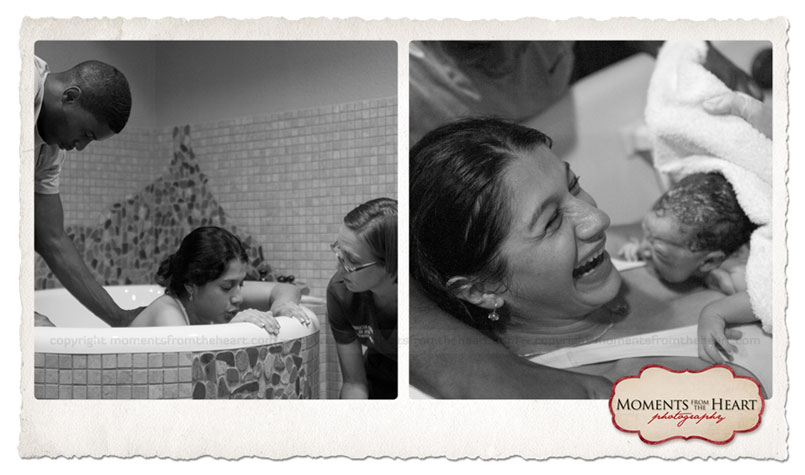 Thoughts from Laura, mom to Alphonso ~

"Why invest in birth photography? As a person who is absolutely obsessed documenting life as much as I can through photos, it was a question even I asked myself. My pregnancy was my first and I knew on the big day, I would be focused on one thing and one thing only...having this baby. Still, I wanted to be able to have captured the details that I would surely miss as I labored - the supportive hand of my child's father on my back as the contractions came and went, the look on everyone's face once my son made his grand entry into the world, the time of the clock, my emotions as I held my son for the first time.

Sure, I probably could have asked a friend to hold the camera and click away during the birth… but would my friend have the trained eye to capture the moments I was looking to keep forever and pass along to my son later on in his life? Would it be fair to invite a loved one to such an event and then give them a "job" that would possibly take way from the experience? I thought probably not… What I was sure of was that I wanted that day documented. I wanted to be able to see it from another angle and relive the moments through those photos.

I started emailing several photographers and asking for quotes, sample slideshows, or portfolios. Several returned my emails and phone calls but Sandy was the one who stuck out among all of them. Being a mom and having a passion for photos herself, I felt an instant connection to her and found it so easy to talk to her about what I was looking for. We met on 1-2 occasions and after the first meeting, she really did not feel like a stranger. She was a friend.

The day of my son's birth was a crazy one and I made it to the Austin Area Birthing Center about 45 minutes before my son was born...Sandy made it about 10 minutes after I arrived. (To this day I don't know how she got there so fast!) Not only was I floored with the amount of photos she took in such a short of amount of time, I was blown away by the quality of the images, the moments she captured that I will forever treasure.

This by far has been one of the best investments I've ever made. Those photos are priceless, that day was the best day of my life.

I'm so thankful I had Sandy there to document this life-changing event. I personally believe having a trained eye and someone who will not get caught up in the moment of the birth experience like a friend or family member would makes all the difference in the quality of the photos you will have of that day. This why I chose to hire a birth photographer and I would do this again in a heartbeat.

Thoughts from Nikki, mom to Ava ~

For many years, I was adamant that I did not want children.  After 10 years together with my husband, I had a change of heart, and I knew I wanted to have every single moment of the birth documented. I decided to find a birth photographer to help document this joyous occasion.  From the moment I spoke with Sandy on the phone, I knew she would be our birth photographer.  She was such a down to earth person whom I could easily relate to.  She made me feel completely comfortable while we discussed not only my pregnancy and birth plan wishes, but all other sorts of womanly talk.  When we hung up the phone, I was confidant she would be there on our daughter's birth day.

Sandy is patient, funny, kind, and extremely professional.  She can even make my husband smile and laugh, which can be a difficult task.  She kept in touch with me at least weekly throughout my pregnancy and as the time grew closer, she stayed in contact daily.  From the moment my husband called Sandy to tell her I was headed to the birthing center, she arrived within minutes (or so it seemed).  I remember her walking in the room and my mumbling some sort of greeting, and to be honest, I don't remember seeing her camera or the camera flash once.  I could feel her presence, but she was so quiet and fluid, having her there was never a distraction.

In fact, she became a part of my birth team in essence because she was another person in the room that was sharing in this special journey with me and my family.

The photos of Ava's birth are so precious to me.  She captured some of the most tender moments that I never knew occurred because I was so focused on my labor.  I cried when I first saw the photos, because I could see the love that both my husband and Mom were exuding while I was having labor pains and once Ava was born.  She even captured the moment Ava was coming out in a very tasteful and classy way.  It's an amazing shot.  What a joyous occasion to have documented.  I am so thankful that Sandy was there to take these special photos for us.

These special memories will be a part of our family legacy forever.

Home » Why Birth Photography? Testimonials from My Clients